In response to Mike’s  A fresh start – so use it!, I went for a long walk yesterday, a Monday. I received a new phone last week and it came with a ‘nagging’ app. It measures my steps and has a daily goal of at least 10,000 steps. It nags when I’m inactive. “You haven’t moved for awhile, how about a walk? Well, I could swear that this thing knows that when I’m not moving, I’m just sitting. It knows I’m not sitting and writing, but just sitting and wasting brain matter on the TV, or playing solitaire on my phone.

This time last year, I was still doing Hip-Hop Abs, with Sean T. I’d started this during the winter of 2013. I was losing weight, which I couldn’t afford, but was losing inches where I needed to, because my midsection was rich in extra inches. Around August of last year, I began to get a nagging ache in my left lower hip. This was something I noticed in my right hip, the year before, but only when I’d lie on it. Now in the left hip it got bad. I couldn’t hip-hop at all, and then I had to stop for short periods during walking, and this wasn’t long walks, it was just getting from the park, to my son’s house, or from the bus stop, to my house. It was diagnosed as Bursitis. Yikes, no more Hip-Hop Abs. Had this caused it? No, my doctor said, and it could hopefully be cured with therapy, or I could get shots for the pain, or surgery might have to be an option. I went one day for therapy, had no insurance, got insurance to cover less than 2 weeks of therapy, was laid up with the virus of the season. The covered therapy never happened, because it was a specific time period. The Bursitis went away on it’s own. Now to yesterday. The fresh start was walking my 10,000 steps. My grandson Willie, who is both Autistic and awesome, got off his school bus, and wanted to go to the park. We did, but there were other children there, some very small. My grandson loves other children, but lacks control of his social skills, and has trouble with hitting others when those invisible triggers, set him off. After ten minutes there, we headed for a larger park, some blocks away, all the while, my grandson is requesting to go on the train (our underground rail system). I’ve done this before because I believe the way to teach social skills and control, is to get him out the house, and into society. (He’s 10 and has spent more time in the house, then out and about. My daughter has tried but the outings mostly turn into disasters). I had 2 train disasters with Willie, myself, hence, the avoidance of the train, yesterday. Instead we visited the other park, where there were also children. My grandson becomes bored, so he attempts to wander away from me as I’m telling him that if he doesn’t listen when I say STOP, that we will go home. He doesn’t listen, as I walk quickly behind him. He sees a group of boys playing basketball and says he wants to play, these are older boys and I don’t know them, plus this park has a ‘not too good’ reputation. When I tell my grandson he cannot play, he sits on the bench and starts applauding the game. Did I mention that this kid is awesome? From there he tries again to get away from me, so I say STOP, this time he does, and I go over and hold his hand and we leave the park. We’re walking again, and we stop at a school with a playground, but we bypass that because, school is not quite over for the day. On we go. We take a longer route home, stop at a store and get water and walk on down the street to another store, grab Cheetos, and now my awesome grandson is ready to go home, and play on his Kindle. The Kindle, is made for kids with a sturdy case, which is cool considering my grandson broke two of them in the past, by tossing them, during a ‘meltdown’, across the room.

So, as each day can be a fresh start, I got more than my 10,000 steps in yesterday, and today, being the last day of school, I will take my grandson out again, and try to reach my goal because as I see it, each fresh start, whenever I’m with him, can be a new start to working on those social skills, and I believe we can get it so right, that the train, the restaurant, the family gatherings, and all the other places my grandson is missing out on, will become less and less challenging for this awesome kid, and his mom. 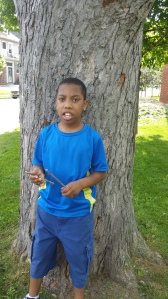