A few weeks ago, my grandson Willie and I went on a fairly long walk around our neighborhood. It was nice and uneventful, and because we didn’t use a bus or other transportation, there was a bit of control. Well, on Monday, we left that control behind. Willie asked to go for a walk, so we did.

Our first stop, as usual, was the playground.

He slid, on the slide.

Then he wanted to go up to the sky on the see-saw.

Willie wanted to stay on the see-saw, but it was too much sun. I asked him where he wanted to go next. He named his favorite thing, next to “outer space.” The train. This is what he calls our Metro Rail. 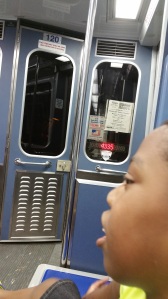 At one of the stops downtown, after people got off, and others were getting on, Willie grabbed my hand, yelled waterfall, and said, “Get off here.”

He walked around the fountain several times.

He enjoyed the spray. 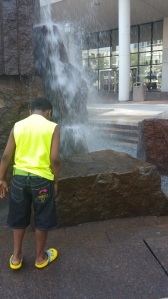 He wanted to go in a building. 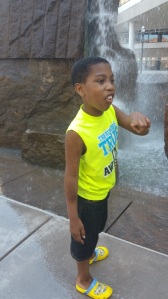 We went to the mall, where he had chocolate chip cookies, and the pepperoni off my slice of pizza. 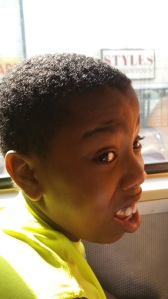 Home was another ride on the Metro Rail, that had to continue on the bus, because there was a stalled rail car ahead of us. Willie became anxious when the train door didn’t close after 15 minutes. That’s when we went upstairs and got on the bus. Willie’s mom picked us up at the bus stop. As we entered the house, Willie said, “I went to school. It was great.” He thought the outing was a field trip. Saying it was great, makes me feel amazing.

9 thoughts on “Outings With Willie”